Penguin Group Australia is pulping 7,000 copies of The Pasta Bible cookbook because the recipe for tagliatelle with sardines and prosciutto called for sprinkling the dish with “salt and freshly ground black people.”

Embarrassing? Yes. But was it really necessary to pulp nearly $20,000 worth of merchandise? Is this sort of dramatic gesture even helpful?

If I can accept a divine Commandment, it’s this one: ‘Thou shalt preserve the species.’ The life of an individual must not be set at too high a price. If the individual were important in the eyes of nature, nature would take care to preserve him.”

Preservation is tied to the iron law of necessity and the right of victory of the best and the strongest…Whoever wants to live, must struggle, and whoever will not fight in this world of eternal struggle does not deserve to live…Even if this is harsh – it is simply the way it is.”

I love this quote so much I want to marry it and have lots of little baby quotes:

“If Sarah Palin isn’t enough of a reason for you to get over whatever your problem is with Barack Obama, then you damn well had better pay attention,” said Hastings. “Anybody toting guns and stripping moose don’t care too much about what they do with Jews and blacks. So, you just think this through.“…

Seeing as this is basically a “how much more” style argument, albeit presented in appalling English for a congressman, what representative Hastings seems to be arguing is that Jews and Blacks are inherently of less value than a moose. “If she’s willing to shoot and skin a moose, how much more would she be willing to…” actually, though having thought it through, I’m not sure what he’s implying here: Hunting and skinning Jews and blacks? Who is this clown?

This clown is, in fact, a former judge who was impeached in the eighties by the House of Representatives in a vote of 413-3 on charges of corruption (soliciting bribes from a defendant to reduce their sentence) and perjury.
Given his criminal past, it should not be surprising that representative Hastings was on Nancy Pelosi’s shortlist to be chairman of the Intelligence Committee (she eventually went with Reyes, thankfully).

In any event, you can read about representative Hastings’ shennanigans in the Washington Post and in National Review. Its a fascinating story, entertaining even if it weren’t so disgusting. And there’s a character named “Waxy Gordon”. Come on, you know you’re curious.

Forget Obama’s workout schedule, or Palin’s sexy-librarian chic: These things shall pass. What always remains a constant, like the tides or a good friend, is Bill Clinton’s ability to amaze. He really is the only politician who warrants keeping the tape rolling 24/7.

Bill Clinton: Will respect Jewish holidays, then ‘hustle up … cracker vote’ in Florida
– by Ben Smith

In an interview with CNN’s Larry King airing tonight, Bill Clinton offered a slightly unusual reason for postponing his campaigning for Obama: The Jewish high holidays of Rosh Hashanah and Yom Kippur, which he’s not known to observe.

“When [the Clinton Global Initiative] is over, and after the Jewish holidays, which follow close on it, I intend to go to Florida, to Ohio, to northeast Pennsylvania, and to Nevada at a minimum,” he said. “I may do events in Arkansas depending on what the Democratic Party does down there. And I’ve agreed to do some fundraising for them in California and New York.”

“Are you kind of feeling Jewish that you’re waiting until after the Jewish holidays?” King asked, according to a CNN transcript.

“No. But I think it would be — if we’re trying to win in Florida, it may be that,” Clinton began, before discussing his real Florida target: “You know, they think that because of who I am and where my politic[al] base has traditionally been, they may want me to go sort of hustle up what Lawton Chiles used to call the ‘cracker vote’ there.”

“But Senator Obama also has a big stake in doing well in the Jewish community in Florida, where Hillary did very well and where I did very well. And I just think respecting the holidays is a good thing to do,” he said.

The Above magazine arrived at my home as so many things do, and I remarked to my wife as I surreptitiously shifted it from the coffee table to the magazine rack “That is a terrible cover. Looks like King Kong.” Which indeed it does. 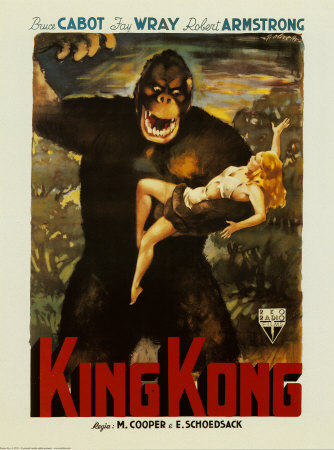 This thing is, aesthetically, a disaster. The photographer should be drawn and quartered, and the editor summarily sacked. And predictably, it has stirred up a bit of controversy over “racial stereotypes” and whatnot. Now I wouldn’t normally give this sort of thing a second thought, but that cover has stuck in my head over the last few days. Couldn’t figure out why, until Buddha connected the dots for me:

The cover also closely resembles this bit of United States recruitment propaganda from the Great War which I had shown to my ninth grade European history class just two weeks ago.

The good folks at WRF” sent me the latest Think lecture, by the always wonderful Calvin Seerveld. It is entitled “Cities as a place for public artwork: a GLOCAL approach”, but the role of art in the public sphere is only the beginning. In the process of laying the foundations for his thoughts on public art, Dr. Seerveld outlines in broad strokes some of the moral underpinnings for a redemptive understanding of economics and community. You can (and should) download the lecture here (think #15). Don’t neglect to look at the urban artwork gallery (from the slide show which Dr. Seerveld used at the lecture, I assume).

This particular lecture is a part of the Stained Glass Urbanism project. In light of Revelation 21:10 – 22:5, this is something we all ought to be actively interested in, but I think will be particularly exciting and encouraging to those living in metropolitan areas. Listen, read, and then do.

gilgal
Create a free website or blog at WordPress.com.